FREE SHIPPING for all orders of $75 or more!

How It All Began…

Rayward Apparel was born out of an eye-opening skin cancer diagnosis, and a challenge accepted by an uncompromising team.

How It All Started

In early 2019, Rayward Apparel’s founder, Devin Regan, was diagnosed with Stage 1A Melanoma. Discovered during a routine skin check, what seemed like a normal freckle turned out to be a tumor requiring immediate surgery. After the successful removal of the tumor, and to avoid recurrence, Devin started researching the leading causes of skin cancer. Now knowing that standard shirts offered little to no UV protection, the need to protect his skin—and a refusal to stay indoors—led Devin into the world of UV protective clothing.

The limited sun protective apparel options left much to be desired. Some felt like plastic or were unbearably hot, and others fit poorly or were produced with questionable chemical processes. Everyone needed and deserved better, he thought, and Rayward Apparel was born.

Since its founding, Rayward Apparel has built a team with shared values and a mission greater than clothing production. We aim to join the fights worth fighting to positively impact lives and #StayRayward. 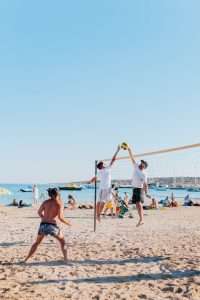 Devin was born in New York, but grew up in Maryland (Go Terps). After visiting New Orleans on vacation in early college, he fell in love with the city and knew he’d return. He ended up moving to New Orleans for good shortly after graduating from the University of Maryland, College Park in 2009.

While at the University of Maryland (UMD), Devin competed as a member of their Track and Field Team. He set the UMD school record in the javelin and also competed in short sprints. After graduating, Devin turned towards other athletic endeavors to satisfy his competitive nature. Now, Devin is an active member of his local volleyball and CrossFit communities, both of which are a big part of his life. He also uses his experience as a former Division 1 athlete to help coach at a local gym—CrossFit NOLA. His athletic background is a large influence on the vision and design of Rayward Apparel products. Apparel designed for performance while still keeping you protected with UPF 50+ fabrics.

Before Rayward Apparel, Devin was the founder and CEO of Maverick VR, a virtual reality entertainment company. He was able to grow Maverick VR into one of the largest Virtual Reality event providers in the nation. After his diagnoses, he decided to sell his VR business to start Rayward Apparel.

In 2019, Devin was lucky enough to marry the love of his life, Kristen Regan. They live with their dog Dubbs in Mid City, New Orleans—where Rayward Apparel is headquartered—and can’t imagine a better city in which to live and eventually start a family. The two of them love traveling, but also cherish the time they get to spend with their friends and family.

While we understand the underlying risks of sun exposure, we also love the outdoors.

Our team includes people from all walks of life, all with a shared goal of living a healthy life. Our hobbies include volleyball, hiking, camping, fishing, kayaking, rock climbing, soccer, running and more. Unfortunately, the same rewarding activities that keep us healthy and make life fun also pose risks with their inherent sun exposure. In all of these activities, keeping your skin protected is critical, but you shouldn’t have to sacrifice style, comfort and performance.

Rayward Apparel aims to not only create the most protective UPF50 shirts, but also the most comfortable shirts possible for athletes and non-athletes alike.

The melanoma diagnosis was a wakeup call, and the quick discovery probably saved my life. I knew I needed to do something to help prevent others from suffering a worse fate. My goal for Rayward Apparel is simple: create the type of apparel I should have been wearing all along—one that protects as well as it performs.”

Subscribe to our newsletter for our latest specials, news and product updates: